Below you can find an overview of the winning fish of the Holland Betta Show 2011:

Before I continue with the results, I first want to thank the following people without whom this show would not have been possible:

- Toën Feyen and Jeroen Dregmans for all their help, trust and giving us organize this event at the Holland Koi Show.

- ZooMed for being our new head sponsor!

- Japan Pet Producs Europe for helping us out with the new equipment.

- Domburg Sportprijzen Holland for providing the beautiful awards for the 1st placed fish of each showclass.

- Michel and Seline for the transport and storage of the show set-up.

- Gerrit Wisseborn for the design and construction of the new Bettas4all Show Units.

- Annemiek van Driel for coordinating the groceries in order to provide us with food and drinks at breakfast and the amzing BBQs.

- All the visitors who took the time to visit our show.

Last but not least I especially would like to thank all my collegues of the Bettas4all Show Team 2011 consisting of Jolanda and Gerrit Wisseborn, Ilse Hoekstra, Michel Stokkelaar, Arie de Koning and Michiel van Bemmel (Chiel; The Netherlands). You all are the true driving force behind this succes and I am proud we again worked together as a true team to resulting in a successful Holland Betta Show 2011. 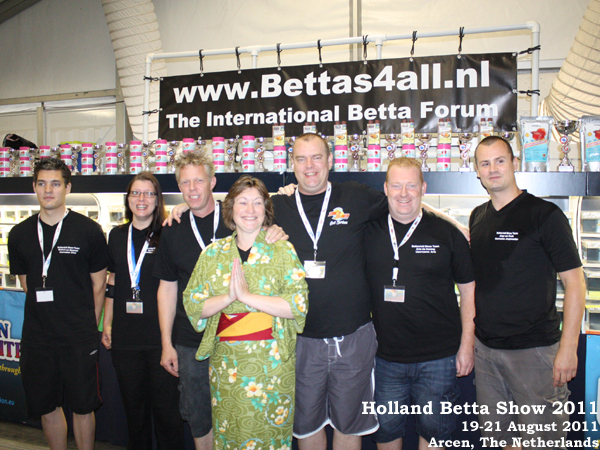 In order to get a better impression of the Holland Betta Show 2011 here a small day-to-day report:

In order to get a better impression of the Holland Betta Show here a small day-to-day report:
On Thursday 18th of August 2011, the Bettas4all Show Team started in the early morning to build up the Holland Betta Show stand in the Holland Aquarium tent at the Holland Koi Show. The build up of our stand with the new Bettas4all Show Units went very fast and within 2 hours we were ready to fill put in the first fish ! Around 18.00h all the breeders benched their fish and the fish were sorted into 18 showclasses in order to speed up the judging on the next day. In the evening we had some nice chat and drinks at our sleeping accommodations and went to sleep to get a bit of rest before the big day of the opening.

After having breakfast on Friday 19th August 2011, we arrived at the show at 8.00h and after checking all the fish at 8.30h the judging team started to judge the 18 showclasses. At 9.30h, the show opened to the public. The judging team did a great job and the classwinners were determined around 11.00h. After this they had to decide which fish won the special prizes such as (reserve) Best of Show male and (reserve) Best of Show female but also the juryprize. At 15.00h the visitors could purchase some quality showbettas which where put for sale. At 18.00h the show closed to the public and after preparing the showstand for the next day we returned to the farmhouse for a BBQ with lots of great food, drinks and awsome conversations.

On Saturday 20th August 2011, the show opened for the public at 9.30h. Many visitors took their time to visit the show and it was possible to purchase some quality showbettas during the entire day. At 18.00h the show closed to the public and again we prepared the showstand for the next day. In the evening we returned to the farmhouse for another great BBQ evening!

On Sunday 21st August 2011, the show opened for the public at 9.30h. At 10.00h it was time for the awards ceremony which was attended many of the participating breeders and off course visitors of the show. It was great to see that all six countries which participated where represented among the prizewinners. Off course we also made a nice group picture. At 11.00h it became possible to purchase some of the award winning fish. After again a busy afternoon the show ended at 18.00h and we started to break down our stand.

Here some impressions of the prize ceremony :